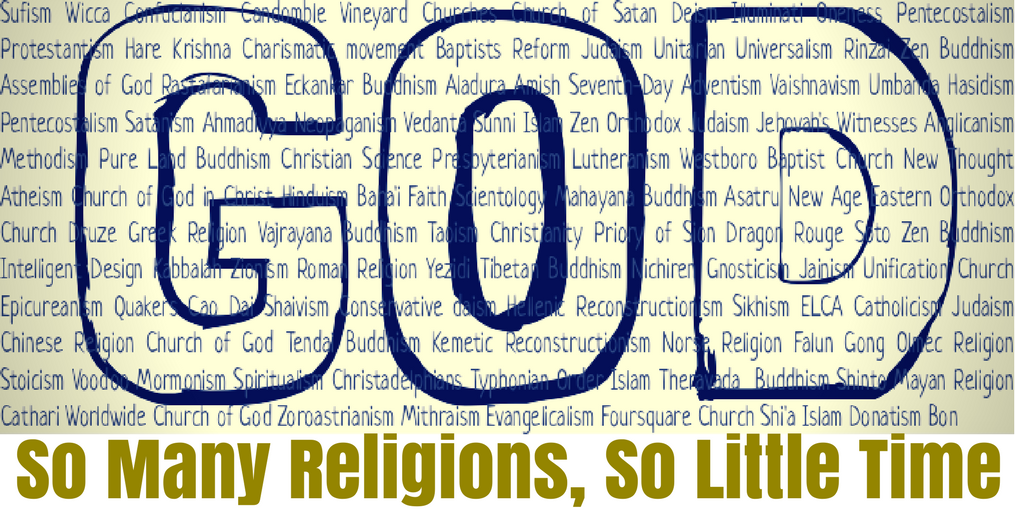 “My faith is good and yours is evil.” Such beliefs have caused religious conflict around the globe. Even though Judaism, Christianity, and Islam all believe in one God, there have been terrible conflicts among these three. Jews (14 million) are the “chosen” people; their sacred book is the Tanakh. Christians (2.2 billion) are “saved” by the Lord Jesus Christ’s sacrifice on the cross; their sacred books are the Old Testament (aka Tanakh) and the New Testament. Muslims (1.6 billion) hold the Qur’an revealed to Muhammad is the “final revelation.”

However, these differences should not surprise us. Why would God, Being, or Spirit inspire only one religion? And at the receiving end, how could we expect humans of different eras, geographies, histories, cultures, politics, and personalities to all develop the same religion?

But are religions really, at heart, so different? At the obvious level, here are a few similarities. Followers of Judaism, Christianity, and Islam all honor Abraham, Moses, Isaac, and Jacob as prophets of the one God. Christianity and Hinduism see Jesus Christ and Krishna as incarnations of God. Hindus and Buddhists believe in karma and reincarnation. Christianity and Islam believe in heaven and hell.

Let us expand our definition of God to Being, Spirit, Reality, and Existence. The mystic stream of the five great religions supports the journey to higher consciousness as the center of each religion. All mystics honor the ethics of their age, work to overcome the tyranny of selfishness and ego, and endeavor to clear their consciousness through different kinds of meditation. The spiritual endpoint of their devotion is described as the highest experience a human can have, a closeness, an merging with Being beyond description: moksha in Hinduism, nirvana in Hinduism, harmony with God in Judaism, becoming Christ-like in Christianity, and fana in Sufi Islam.

Hidden beneath outdated dogma, institutionalized hypocrisy, and personality cults, there exist subtle universals in all religions. Abstract ideas such as good, truth, justice, beauty, love, kindness, consciousness, and alleviation of suffering are concepts that carry Reality.

Atheists and materialists dismiss such ideas as accidents of evolution. Whether or not someone believes in God, these ideas are at the heart of humanity. How cold is the heart that reduces all to chemistry and physics.

A major reason I follow the Sufi mystical path is its universalism. Having travelled around the world when young, I saw a deep humanity in all people. Not all Sufis are the same and spiritual practices can differ among Sufi orders such as the Naqshbandi, Shadhili, and Chisti. However, the greatest Sufi masters, Ibn Al Arabi and Rumi, advance Islamic cosmological doctrines and religious teachings that honor the Prophet Muhammad and recognize that all mystical paths lead to the One. Almost all Sufi groups in the USA have this universalistic perspective.

Here is a famous ecstatic poem by Ibn Al Arabi, considered the Greatest Sheikh of Sufism:

“My heart has become capable of every form;
It is a pasture for gazelles and a convent for Christian monks,
And temple for idols and the pilgrim’s Kaba
And the tables of the Tora and the book of the Koran.
I follow the religion of Love:
Whatever way Love’s camels take, that is my religion and my faith.
From Ibn Al Arabi’s book of poetry “The Tarjuman Al Ashwaq” or “Interpreter of Desires” Verse XI, Translated by Reynold Nicholson