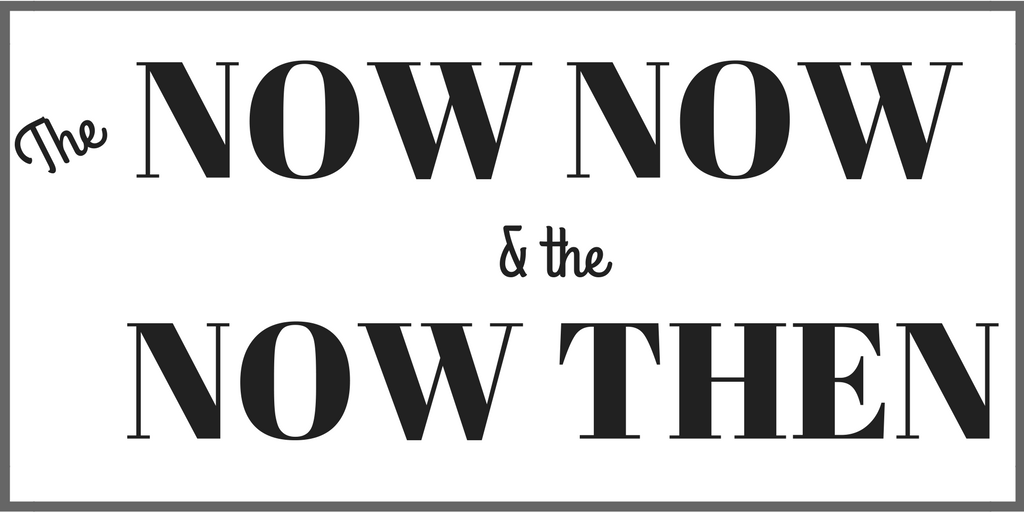 If I lived in the past, I might not search for the Now the same way I do today.

Be it a watchword for our time or a true synonym for bliss consciousness, the awakened mind, fana, moksha, enlightenment, nirvana, satori, illumination, salvation, vibration attunement, chakra or Christ consciousness, “being in the now” suggests a treasured state of mind that is essentially human.

We have all glimpsed the Now, if but for mere moments. Who of us has not been lost gazing at the stars, a perfect rose, or a beautiful face? Who has not been awed by a flash of lightening or the thunderous power of a great wave? Who has not disappeared into the harmony of a crowd or been carried away by a transcendent explosion of great sex? Have you seen “the universe in a blade of grass”? Have you ever dreamed the freedom of flying? What about those times of heightened awareness, when you are totally at one with your actions? Although times change, Now is always here.

Ancient religious texts and belief systems carry knowledge to achieve and stabilize access to the Now. Founders of these religions experienced the Now with great force. Mystics of all religions developed paths to remember the Now.

I have followed the Sufi path for some 25 years because of it recognizes that different paths can lead to the same Destination. I enjoy enriching my practice by learning about these different paths.

I am captivated by the Navajo concept of the Now. Early tribes developed many different belief systems, usually based on their perceptions of nature and their fellow human beings. The Navajo path, “Walking in Beauty,” is harmony of the self and the natural order, the desired state of being. When one falls from that order, be it by disease, injustice, moral wrong, or transgressing taboos, the community shares long intense ceremonies with chanting and sand paintings based on their mythology. Mediated by spiritual leaders, these ceremonies restore balance to the afflicted and to the community. Although now challenged by the dominant culture, the height of this balance is the Now, enhanced by the stark beauty of the American Southwest.

I find it amazing how, over time, different human beings approached the Now. Cities and empires grew and formal religions evolved from tribal religions. Among the earliest were Hinduism and Judaism. Hinduism embraced the many gods of conquered tribes and territories, evolving the overarching belief that the Essence of the person (Atman) is identical to Brahman, the universal Essence of Now. The highest state in Hinduism is Moksha, the greatest happiness, stillness, and freedom.

Buddhism, daughter of Hinduism, dispensed with gods and focused on achieving the immediate experience of the Now, also known as the original mind, kensho, or Buddha nature. The mystics of Hinduism and Buddhism developed complex ethical and meditative traditions to fully experience the Now of this Essence.

I am personally comfortable with the concept of One God, equating it with one-pointed concentration.

Judaism, although tribal, was based on the idea of One God and protected itself from the polytheism of neighboring tribes. The overwhelming spiritual experience of Moses on Mt. Sinai evokes a Jewish Now.
Having a personal relationship with God, Moses asks God to show Himself. God overwhelms Moses with the impact of His Presence, by dissolving a mountain and the consciousness of Moses. Moses returns with amplified awareness, a new resolve and ability to lead his people, and the Ten Commandments, the core of Jewish, Christian and Islamic ethics.

Jesus, a Jew, founded Christianity. In His Sermon on the Mount, Jesus was the first in history to truly identify with, recognize, and honor the poor and unfortunate. The New Testament tells the story of Jesus’s life and His dying on the cross. His core mystical experience occurred when He retreated to the wilderness, fasting for 40 days. This experience was remarkably similar to that of the Buddha sitting beneath the Bodhi tree, resisting temptations of the world and vowing not to move until he reached enlightenment. Jesus returned with an enhanced consciousness, accepting his mission to die on the cross. Christians worship Jesus Christ as the Son of God, the Savior come to earth to die and redeem Christians from their sins. Christians relate their “Now” to illumination, revelation, and salvation.

Islam is directly connected to both Judaism and Christianity. Judaism and Islam are the two most similar major religions. (This hardly seems apparent given the protracted Israeli-Palestinian conflict.) Judaism and Islam both recognize Abraham, and Moses as great Prophets. In contrast to Judaism, Islam recognizes Jesus as the Spirit of God, but sees salvation as based on the Mercy of the One God, not the sacrifice of Jesus. Muhammad was in the habit of meditating in a cave near Mecca. While walking home, he was stunned by direct contact with God. After this powerful experience Muhammad began preaching Islam to his polytheistic tribal society, at odds with the economic and political interests of the Meccan rulers.

The Now or Infinity of Being is recognized in all religions. Judaism, Christianity, and Islam all define the One God as infinite. Hinduism provides paths through a selection of gods to the Infinite and Buddhism directly approaches the Infinite Field.

The Now is the heart of the established religions. However, today, the warts of these religions are apparent. Today we hear and know more and those unaffiliated with religion are gaining in numbers.

The unaffiliated are a mixed group. I am particularly interested in the independent seekers who are exploring and combining traditional and non-traditional beliefs. These people resist rigid dogma, but seek something more, bigger, maybe the Now.

In today’s world we have less sickness, less violence, and longer lives than ever before (See Stephen Pinker’s work). If we make the effort to see beyond tempting distractions and under the disturbing headlines, perhaps we can find a path to the peace and joy of the Now. This would be particularly comforting for those who struggle for justice in our world.