Quantum physics makes me smile. Although a science fan, I like to see scientists stymied. Reality is not what they expected.

I especially like to see wobbles in reductionism, the claim that everything can be reduced to the laws of chemistry and physics. These wobbles open up discussion of the most important things in our lives: love, justice, truth, beauty, pursuit of good, and the most nonmaterial subject: God, Being, or Spirit. 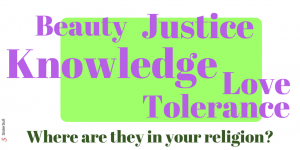 Many are turned off by outdated religious dogma and will not accept atrocities done in the name of religion. But they believe something spiritual exists, something important beyond the physical.

Others hold fast to purely material dogma: atheists with their tight arguments and the reductionist scientists who claim everything is now or will be explained by cause and effect, chemistry and physics.

Sometimes it looks like smart people are scientists and believers are soft-headed. No one wants to be an idiot.

Since quantum physics pokes a hole in the promises of classical science, we are now more free, without looking stupid, to investigate the non-physical.
It is even more fun that quantum mechanics (or quantum physics) is not just theory but the platform for today’s transistors (personal computers and the Internet), lasers (CDs, DVDs) , Blu-ray, MRIs, etc. etc.

SO WHY IS QUANTUM PHYSICS SO WEIRD?

The short answer is that reality, at the level of the tiniest particles, for example electrons, photons or even atoms, turns out to be surprising. Here are two major quantum physics ideas:

1.  Quantum Entanglement: Beyond even Einstein’s concepts of time and space

Two linked particles, at different ends of the universe, can “communicate” and influence each other at speeds faster than the speed of light – as if they were the same entity. Einstein called it “spooky action at a distance”. Erwin Schrödinger, who came up with the name “entanglement” called it “the characteristic trait of quantum mechanics.”

The double slit experiment shows: 1) light and matter behave as either waves or particles and the act of observing/measuring them affects the observed reality; and 2) probability rules. Einstein could not accept the idea that probability rules and commented “God does not play dice with the universe.” He sought a hidden variable as a cause instead of probability. (The possibility of a hidden variable was cleverly disproved by J. S. Bell in 1964.)

The great Richard Feynman commented that this limit on the ability of the observer to predict experimental results “contains the only mystery” of quantum mechanics.

The classical scientific world view shredded the outside husks of religions. No longer could we accept old religious stories and idiosyncratic dogma as explanations of who we are and what is the cosmos.

Today, with quantum physics, science itself challenges materialism and the reductionist view that chemistry and physics will provide all the answers.
I am hopeful that quantum physics will help widen the arena of discussion between science and religion.

Consciousness, the next blog topic, further loosens the grip of both religious and scientific dogma.

One Reply to “Quantum Physics and God”