You see a lot of off-the-cuff spiritual advice online. Rest in calmness. Find the stillness deep within. Come to the Light. They are beautiful words, indeed, but somehow they suggest that all you have to do is turn a switch and you arrive, as though your higher consciousness waits you just around the corner. Well, this wasn’t true for me and it’s just not true for so many others. 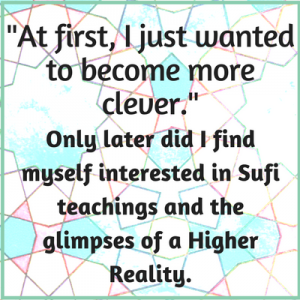 Maybe you’re looking for a break, a way to relax, breathe. Me? At first, I just wanted to become more clever. In my twenties, I discovered the books of Idries Shah. His devilishly clever British upper class putdowns, combined with classic Sufi stories, appealed to me. Only later did I find myself interested in Sufi teachings and the glimpses of a Higher Reality included in his writings.

I joined a USA Idries Shah group but found the leadership unsatisfactory. What characterizes poor spiritual leadership? I’m not sure, perhaps over-developed egos, anger, lack of self-control, maybe a general lack of kindness. It any case, it was easy to confuse my own faults with those of a teacher.

An old friend left the group before me and travelled to Afghanistan to find a deeper connection with Sufism. After meeting a series of Sufi masters, including Ustad Khalili, the last poet laureate of Afghanistan, my friend began translating Persian Sufi poetry and returned to the US. At Mr. Khalili’s suggestion and more as a friend than as a teacher, he started a group centered on Sufi material and readings from other spiritual traditions. I joined the group and began an uneven meditation practice. Slowly, I increased observation of my thought and behavior patterns. Though I had always considered myself a “good” person, (don’t most people?) I was surprised to find my ego so strong, my anger so quick, and my greed so measurable.

Several years later, my friend became the student of Raz Mohammed Zaray. Mr. Zaray was an Afghan Sufi teacher who escaped the Russians (with his family via camel to Pakistan) and came to the US. He settled in the San Francisco East Bay which has the largest Afghan community outside Afghanistan. When I met Mr. Zaray at a luncheon, he just seemed to glow. Without thought, I asked if I could become his student.

Several mornings a week for a couple of years, my fellow student Luanne and I sat with him on his balcony overlooking a large green field. In addition to Quran he taught meditation, Sufi poetry and many Sufi stories. I remember thinking then I would treasure these mornings all my life and so I have done.

My friend Bob was light years ahead of me in Sufism. Before Mr. Zaray died in 2010, he appointed Bob as his successor, passing on a Sufi community of Afghan-Americans. I accepted Bob as my teacher.

My experiences with these two teachers has been, inspiration and beauty combined with powerful correction. I was never asked to surrender myself personally or to do anything that made me twinge, but I was expected to recognize that certain thought patterns were wildly detrimental to my spiritual health.

5 Replies to “Connecting with the Right Spiritual Teacher”