How are we, as perfectly imperfect physical beings, supposed to deal with the concept of evil? Some of us are taught that God is all good and all powerful. 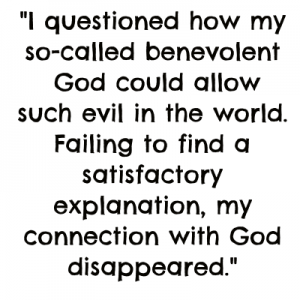 After reading about the Nazi holocaust, I questioned how my so-called benevolent God could allow such evil in the world. Failing to find a satisfactory explanation, my connection with God disappeared. I found myself agreeing with the classic atheist answer, “Simple stupid, there is no God.”

But a spark of spirituality remained in my heart. I joined my generation’s search for higher meaning eventually stumbling upon some Sufi material, which sank for me in all the deeper as I was soon forced to deal with the inevitability of death. My seven relatives died, one after another, over a period of 15 years. Then a diagnosis of cancer made quite clear the certainty of my own death.

As my study of Sufism and the great religions advanced, I found teachings in each that helped me accept death and suffering. Here are a few simplifications.

The ancient Persian Religion of Zoroastrianism tells of a great struggle between the good God and the evil God. (Ultimately, the good God will win.) This struggle is not unfamiliar. We have but to observe the world around us. Our own mind offers a theater where selfish and unselfish thoughts fight for dominance. Zoroastrianism offers us a credible explanation of good and evil.

Hinduism provides a wider vision. Hindu gods are not eternal, all knowing, or all good. Beyond these gods, however, there is Brahman, the overarching Spirit of the Universe, knowable through right practice and meditation. The cause of evil, suffering and good is our freedom to choose good or bad, unselfish or selfish, thoughts and actions. Karma, operates over more than one lifetime and explains the good and evil which happens to individuals and groups. Good or bad actions eventually cause good or bad circumstances in this life and in the next. I find karma, in its essence, a universal idea. Consider the Christian New Testament verse from Galatians, “As you sew, so shall you reap”.

Buddhism, daughter of Hinduism, accepts no gods. Buddhism stresses that our ordinary world is suffering because we do not understand Ultimate Reality. The way out of suffering involves understanding our thoughts and actions, even our individual selves, are an illusion. All happenings in our world occur through a complexity of causes and effects. For example, when I try to list the causes of an event such as murder on a dark street, there are tens of causes. Examples are the mind of the killer, the broken streetlight, the sudden decrease in traffic, the preoccupied thoughts of the victim, her broken high heel, etc. For the individual, Buddhism accepts the law of karma, but teaches the interested how to overcome illusions through right practice, and through insight into the mind. Similar to Hinduism, such practice opens the mind to the Higher Reality, here named Buddha Nature. I see this emphasis on purifying the mind and meditation in all spiritual traditions. I also find it delightfully modern to look for the causes of the causes of evil.

Judaism is the earliest of the One God religions. In the Tanakh (Old Testament), God punished his people for going astray. Although satan is introduced in Bereshit/Genesis, evil is generally seen as part of human nature, not a primary force. The Hebrew prophets called people back to God. I like to consider evil and selfishness as part of human nature because it fits well with modern ideas of psychotherapy as well as the scientific theories of evolution.

Christianity, daughter of Judaism, eventually took the idea of satan seriously, some Christians seeing satan as an active force in the world. Satan contests with God, reminiscent of the dualism of Zoroastrianism. On the few occasions I have met someone who seemed have an unexplainably evil soul, this view of evil rang true. I believe the concept of Satan can be useful for self-examination but runs the danger of shifting responsibility from the self to Satan.

Sufism/Islam introduces another approach based on the 99 names/attributes of God in the Quran. God is good and beautiful but all is from God, whether we see it as good or evil. Pairs of God’s names explain our world as composed of opposites: Death and Life, Destroyer and Creator, Contraction and Expansion. (Science has located an area in the human brain which compares, contrasts, and identifies opposites.) The Beautiful names of God include Mercy, Love, Knowledge, Truth, Justice and Patience. All names exist at an infinite number of levels, from 0% to 100%. We learn about the beautiful names by their absence or their opposites. The existence of good illuminates evil. The existence of evil illuminates good. In this sense, as a friend proposed, Hitler was an avatar of good by the extreme demonstration of its absence. (If you feel compelled to write in and accuse me of supporting Hitler, please contain yourself as you have missed my point.)

Each of the religions put forth valuable ideas about evil. My personal need was to look at the worst and not be overwhelmed. Sufism and Buddhism were most helpful. I now see evil as part of the complex swirl of our world, hatred, love, greed, generosity, justice, cruelty, ego and humility, continually changing and interacting. So it is now, so it has always been, so it will always be.

The Dalai Lama and his people have suffered more than most of us. I take his advice that the path to calm and happiness is a certain level of acceptance and attempting to do the most possible for the good of all. He recommends focus on the efforts and energy of those who combat evil instead becoming lost in despair. My personal path is to do the best I can in these times and to work my way through the swirling fog back to God, choosing the path of the most beautiful (and most powerful) names of goodness and mercy, which in Islam and other religions, is always, in the long or short run, stronger than evil.

And an afterthought, without evil, what would we do? Would I just be a robot, or a Stepford wife?