Thomas Nagel is my favorite atheist. He is smart, unafraid, and champions ideas unacceptable among dogmatic scientists, secularists, and atheists. 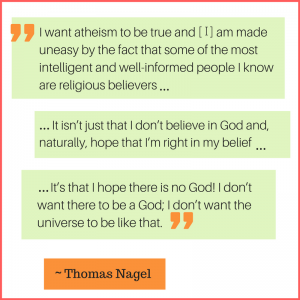 Well respected and widely published, Thomas Nagel is no slouch. However, his last book, “Mind & Cosmos: Why the Materialist Neo-Darwinian Conception of Nature is Almost Certainly False, took on the theory of evolution and natural selection because it is reductionist.  Nagel objects to reductionist theory because its explanation of life, consciousness, cognition, and values is based entirely upon chemistry and physics.

It is on the basis of this position that I award him Favorite Atheist Status.

In the conclusion of Mind and Cosmos, Nagel argues “In the present climate of a dominant scientific naturalism, heavily dependent on speculative Darwinian explanations of practically everything, and armed to the teeth against attacks from religion, I have thought it useful to speculate about possible alternatives.

“Above all, I would like to extend the boundaries of what is not regarded as unthinkable, in light of how little we really understand about the world.”

So here are some details of his argument which center on the concept of probability and even give a nod to fundamentalist Christian scientists who support the idea of intelligent design, an anathema to the evolutionists:

“Doubts about the reductionist account of life go against the dominant scientific consensus, but that consensus faces problems of probability that I believe are not taken seriously enough, both with respect to the evolution of life forms through accidental mutation and natural selection and with respect to the formation from dead matter of physical systems capable of such evolution. The more we learn about the intricacy of the genetic code and its control of the chemical processes of life, the harder those problems seem.”

“The process of natural selection cannot account for the actual history without an adequate supply of viable mutations, and I believe it remains an open question whether this could have been provided in geological time merely as a result of chemical accident, without the operation of some other factors determining and restricting the forms of genetic variation. It is no longer legitimate simply to imagine a sequence of gradually evolving phenotypes, as if their appearance through mutations in the DNA were unproblematic – as Richard Dawkins does for the evolution of the eye. With regard to the origin of life, the problem is much harder, since the option of natural selection as an explanation is not available. And the coming into existence of the genetic code – an arbitrary mapping of nucleotide sequences into amino acids, together with mechanisms that can read the code and carry out its instructions – seems particularly resistant to being revealed as probable given physical law alone.

“In thinking about these questions I have been stimulated by criticisms of the prevailing scientific world picture from a very different direction; the attack on Darwinism mounted in recent years from a religious perspective by the defenders of intelligent design. Even though writers like Michael Behe and Stephen Meyer are motivated at least in part by their religious beliefs, the empirical arguments they offer against the likelihood that the origin of life and its evolutionary history can be fully explained by physics and chemistry are of great interest in themselves.

Another skeptic, David Berlinski, has brought out these problems vividly without reference to the design inference. Even if one is not drawn to the alternative of an explanation by the actions of a designer, the problems that these iconoclasts pose for the orthodox scientific consensus should be taken seriously”

Thomas is an atheist. He states he is “not just unreceptive but strongly averse to the idea” of a transcendent being creating and assisting evolution. Rather he would like to see something beyond the material added to the current understanding of the natural order.

Although Nagel would hardly agree with my mystical perspective, I believe that his ideas add to those of Albert Einstein, and Francis Collins, expanding the arena of discussion for science and religion.